Today on MP, we are joined once again by the enthralling Dr. James Rietveld, and are all the more enlightened by his lecture on Ancient Jewish Magic!  Now before we actually -get- to the lecture, we spend a good minute catching up, opening presents, and getting side-tracked. Hope you like nerdy shenanigans, guys!

James Rietveld is a professor of Religion, Archaeology, and Antiquities from Claremont Graduate University’s School of Religion (PhD 2006). His specialties include the History of Christianity in the Early, Medieval, and Byzantine periods and Greco-Roman religions. Also at Claremont, Rietveld minored in Islam and Hinduism. Rietveld received both his Bachelor of Arts and his Masters of Arts in History at California State University Fullerton in 1991 and 1998 respectively and a classical education in Greek and Latin from University of California Irvine from 1999-2001. Rietveld is currently teaching at California State University Long Beach. He has a passion for studies revolving around Asia Minor and is an accomplished, author and radio presenter.

Join the groups on social media that are related to your hobbies! Ex: Taxidermy, Cast Iron, Homesteading. etc.. They may help you get more knowledge, friendships, and weird things you might want. Like a bag of teeth.

We couldn’t help it… (Just One More)

On today’s fresh slice of MP, we have for you a delightful lecture and meditation on Saturn and how it affects us by the amazing, Thea Wirsching. But before you get to the good stuff, you get to wade through Dad Jokes, Capsasin, and Apple Pie.

For more about Thea, creator of The American Renaissance Tarot, and Pagan Priestess who holds a PHD in American occult history, visit: www.theplutobabe.com

The Shaking of the Sheets

The Dragon and the Rose; Santa Ana, CA

Listless listeners who dare to listen, boy do we at MagikPizza have a treat for you!

Today we offer to you for your listening pleasure, another FANTASTIC Lecture by Dr. James Rietveld! But in order to get to that magnificent information, you must first traverse through the seedy underbelly of Introduction mispronunciations, Depression, Alaskan Fish Skin Sewing, and getting speeding tickets while in Compton, California.

Promotional Flyer for the event created by the Grand Madame of Ipso Facto, Terri Kennedy.

Artemis of the Ephesians: Mystery, Magic and Her Sacred Landscape (book)

I’m on a Boat– Lonely Island

And the sweet, soul-refreshing memes:

It is Oui, Hannah and Stormy! No one else was talking about the Spirit Board controversy in February (a shame, truly), so we thought you’d enjoy a break from all the lovey-dovey nonsense and have a big fat slice of MAGIK PIZZA! Topped with Satanic Panic, story-swapping, and good old fashioned wine-slurping. Many thanks again to Terri Kennedy for this topic idea and for the use of Ipso Facto as our recording space.

Brought to you by:

The Little Hours; (2017)
The Memphis Vampire Series;  By Alex Bledsoe

Use a levain for your Sourdough starters! Use apple skins, dried raisins and warm water and let ferment for 4-5 days!

Media Fueled the Satanic Ritual Abuse Craze. Social Media Will Fuel the Next False Panic. by Katie Herzog ( Mar 9, 2018)
Buckland’s Book of Spirit Communicationsby Raymond Buckland
(If you’d like further information on Terri’s notes, feel free to contact us and we can forward you copies.)

Carmilla;  By Joseph Sheridan Le Fanu
Interview with a Vampire; By Anne Rice
Dracula; By Bram Stoker
The Girls with Games of Blood; By Alex Bledsoe
Blood Groove; By Alex Bledsoe
Michelle Remembers; By Lawrence Pazder & Michelle Smith
The Satanic Bible; By Anton LaVey
Might Is Right;  By Arthur Desmond
Buckland’s Book of Spirit Communications; By Raymond Buckland

Hannah and Terri setting up the first ever MP Ouija episode!

“Ouija Board” by Norman Rockwell

One last time…but with more sparkle.

HEEEY Pizza Pals! We wish you a blessed Full Moon, and remember it’s an eclipse also! Today’s episode is going to be a bit different, in that we’ve  got a special treat for you today! A riveting salon lecture on “The Egyptian Book of the Dead”, by the Intellectual and entertaining, Dr. James Rietveld!

Flyer for this salon lecture created by Terri Kennedy

Firstly, I’d recommend getting those Hard plastic,full headed wig stands over the styrofoam ones. Mainly because the foam ones can be accidentally crushed, stained or burned much more easily than the hard plastic ones. It also cant shrink, which is a plus..

Secondly, I HIGHLY recommend getting the MALE-anatomy ones, as they are far closer to an actual human shaped head than the FEMALE ones.

You can use steam from an enclosed bathroom and hot shower for larger items, OR use a hot kettle to release the steam more precisely. If using the kettle, keep the hat/your hands a couple inches away to avoid steam burns.

After the hat is warm and soft, you can use your hands to manipulate the bowl and brim to the desired shape, getting rid of all the kinks and divets. If the hat ends up getting too wet, just let it dry a bit and try again until it’s the way you want it.

Ojibwe traditional hand-harvested and wood-parched wild rice or manoomin from Minnesota (the food that grows on the water).

“Hand Harvested and Wood Parched – Our manoomin is hand harvested by the Anishinaabeg from the 1835, 1855, and 1867 Treaty areas and beyond. We are proud to bring you this natural gift from the Earth. White Earth Nation’s wild rice is certified USDA MCIA 100% Organic.”

Seriously, guys, this tastes unbelievable…It’s a perfect addition to any special sabbat gathering and ritual potluck. Let’s support our indigenous neighbors and share the blessings of Mother Earth.

A Ka Dua by James Stone

‘Song of the Pharaohs’ by Brian Keane and Omar Faruk Tekbilek

Artemis of the Ephesians: Mystery, Magic and Her Sacred Landscape (book)

Click here to read more about this month’s Full Moon!

And the meme Floodgates, opened:

O come, all ye faithful, Joyful and triumphant.. To this month’s episode of MAGIK PIZZA!

To end this accursed year, we will speak of the Red cup controversy,  book-floods, holiday happenings and most importantly.. We finally find out what Ian thought about that Male Flight-attendant!

It’s all about giving books and art for Yule. Something special that won’t get used up or broken, and can help encourage conversation between you and your loved ones.

Stormy: My recommendation for this episode has nothing to do with holiday spirit per say, but everything to do with something i’ve been obsessively consuming nonetheless: the True-Crime podcast Murder Mile!

The Wyrd Sisters – Solstice Carole (off of the album Leave A Little Light)
Here is their full discography.
Unto Ashes – For I Am Winter Born (off the album Spellbound in Winter (ep)
Theme from “Mission: Impossible by Adam Clayton, Larry Mullen Jr.
Somewhere Out There (Strueres ver. 80s Instrumental Hits Vol. 1)

The Dragon and the Rose

Das Bunker
the Yuzuya in Japan

OC Weekly with their article on our favorite local witchy shop

Remember, remember the podcast for November!

Dearest of listeners! On today’s episode we talk of different November traditions, and how they relate to us. References range from V for Vendetta to Star Trek, and from various histories to our own personal fantasies.

In a large bowl, whisk together balsamic vinegar, cider vinegar, honey, mustard and shallot. Drizzle in oil while whisking constantly to make a vinaigrette and season with salt and pepper. Add spinach, watercress and lettuce and toss gently to coat. Scatter pumpkin seeds and cheese over the top and serve.

Stormy is back, and apparently has a lot to say! On today’s slice of Magik Pizza, we discuss the trip and attempt to make our way to the ACTUAL topic of the episode: Traditions! But until we do, please enjoy our cheesiness.. For if you make it through, you just might ‘find Jesus’.. Cha-CHING!

(If you are lactose intolerant however, we DO promise that some actual discussion actually happens. Maybe.)

Hannah: Bring some Indigenous perspective into your podcast list. Email Magik Pizza with your podcast suggestions!

Featured Songs/Musicians/Performers:  (Each entry has multiple links. Click each to hear, learn and buy!)

Traditions; Fiddler on the Roof

Bruce Springsteen; Born in the USA

Start learning another language with Duolingo

What is Tradition? by Nelson H. H. Graburn

Tradition, But What Tradition and For Whom? by Ruth Finnegan

the Magic of Making Bread with Margaret Fabrizio Part 1

the Magic of Making Bread with Margaret Fabrizio Part 2

Cooking in thermal vents in Iceland

Dragon and the Rose

Basilica of the Holy Blood

Featured toppings on today’s slice of Magic Pizza include: finding out what we’ve been up to, drinking copious amounts of wine, and discussing the awe-inspiring experience that is the concert of Wardruna and Eivør!

Indulge, enjoy, and let us know how you like our toasty slices!

Witchdom of the True, Vol. 1: A Study of the Vana-Troth and the Practice of Seidr

The Theatre at Ace Hotel

The Dragon and The Rose

The Chamber in Anaheim

↑ This was the opening of the Wardruna set, stolen from Tianay (Thanks, T!!!)

↑ Lindy is killing it!! stolen from Tianay

↑ Inside the theatre, stolen from Tianay

↑ Picture of Reception Area by Hannah

↑ Picture of Reception Area by Hannah …you see the bar lit up at the bottom.

↑ Christine and Hannah “My camera is tripping!” -Hannah

All too true! With today’s slice of Magik Pizza, your hosts Hannah and Stormy run off to the witchiest of witchy slumber parties, and we’re back to tell you all about it!

We took part in the 8th annual Movie Marathon Slumber Party at the Hollywood Forever Cemetery on Santa Monica Blvd, hosted by Cinespia! It featured classic witchy movies including The Craft, Practical Magic, and the Witches of Eastwick!

We hope you are entertained by the episode, and maybe have a Midnight Margarita or two! Enjoy!

S: The Hopper Popper, and the Hopper Hanger! Very good for dispatching and processing rabbits, if you are into that sort of thing.. Like me.
Check it out: Here

H: Putting water outside for the animals, and as an offering to the spirits of the land. Our society controls water for it’s own ends like irrigation, household and municipal water use, and industrial uses, most often without much concern for the surrounding ecosystems. Only about 1% of Earth’s water is easily accessible freshwater. Find out where your water comes from and keep your politicians accountable! Water is precious. Share it and see who comes by to visit.

Shout outs:
To our first ever emailer, Willow Wren! We luh and appreciate yeeww~ ❤

As well as, fellow Side-Witches:

The Craft: Music From The Motion Picture

The Witches of Eastwick 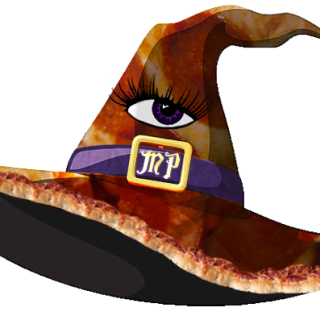 Magik Pizza is a journey based podcast dedicated to exploring concepts, culture and community within paganism and witchcraft.